Reasons Children Vomit and Have Diarrhea and How To Treat Them… 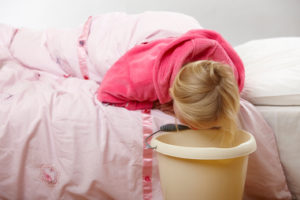 Gastroenteritis is usually caused by a viral, bacterial, or parasitic infection. The infection causes a combination of vomiting, diarrhea, abdominal cramps, fever, and poor appetite, which can lead to dehydration. The child’s symptoms and history of exposure help the doctor confirm the diagnosis. Illness begins 12 hours to four days after exposure and last for three to seven days. Viral gastroenteritis peaks in the winter, that is when 70 to 90 percent of cases are seen in the hospital.

Vomiting, not to be confused with spitting up. Spitting up is more a laundry problem than a medical one. Kids who spit up do not become dehydrated. Viral gastroenteritis is a fancy medical term for an infection of the intestines that disrupts the normal digestive process and cause vomiting. While viral gastroenteritis can present many symptoms, including headache, fever, decreased appetite, abdominal cramps and muscle aches… diarrhea and vomiting dominate.

Diarrhea is a little harder to diagnose because watery stools are fairly common and most healthy individual will experience it from time to time for reasons which do not qualify as diarrhea. In breast fed babies frequent stools can be normal. The baby may dirty the diaper every time they are fed, up to 12 times a day. It often looks watery and yellow with little remnants that look like seeds. Despite appearance, this is not diarrhea. No matter how bad the diarrhea, in developed countries, it rarely leads to dehydration because it is easy to replenish lost fluids.

Rotavirus spreads easily among infants and young children. The virus can cause severe watery diarrhea, vomiting, fever, and abdominal pain. Children who get rotavirus disease can become dehydrated and may need to be hospitalized. In 2006 two new vaccines were introduced , rotaTeq and Rotarix. They ahve been provne to be safe and very effective in reducing hospitalization, dehydration, emergency room visits and most importantly… death. Since the vaccine, the number of severe cases of gastroenteritis has significantly dropped and the majority of cases can now be handled at the pediatrician’s office. Two rotavirus vaccines are currently licensed for infants in the United States: RotaTeq® (RV5) is given in 3 doses at ages 2 months, 4 months, and 6 months Rotarix® (RV1) is given in 2 doses at ages 2 months and 4 months. The first dose of either vaccine should be given before a child is 15 weeks of age. Children should receive all doses of rotavirus vaccine before they turn 8 months old.

Children can contract bacterial gastroenteritis by…

Bacteria may grow in many types of foods that have been left out and not refrigerated (potential problem situations include buffets and picnics). Staphylococcus bacteria in contaminated food may secrete a toxin that causes sudden vomiting and diarrhea. Gastroenteritis contracted from food containing microorganisms or bacterial toxins is sometimes called food poisoning. With viral gastroenteritis, the skin of the anus or the lining of the intestine can become irritated and cause small amounts of bleeding. However, if it appears the amount of blood is grater than 10 percent of the entire stool or bleeding recurs with several consecutive stools, your child needs to see the pediatrician promptly. A stool test can confirm diagnosis. Bacterial gastroenteritis infection can become quite severe.

Gastroenteritis caused by parasites (such as Giardia intestinalis and cryptoporidum parvum is usually acquired by drinking contaminated water or by fecal-oral transmission (which is known to occur in day care centers). The parasite Entamoeba histolytica is a common cause of bloody diarrhea in developing countries but is rare in the United States.

Although vomiting and diarrhea can be exhausting to a parent, vomiting and diarrhea in and of themselves are not dangerous to a child. Dehydration is the greatest danger. A simple way to understand dehydration is to think of your child’s body as a box. As long as fluids coming out of box are replaced by fluids going into the box your child will not become dehydrated. During gastroenteritis fluids can be replenished by having the child drink water and other drink, but during a bout of gastroenteritis, it can be hard to stop those fluids from pouring back out. If required, fluids can be given intravenously in the hospital. This is rarely necessary and the oral rehydration usually works as good as an IV.

If your child fails this cycle more than two times, call the pediatrician. Just like you would ease your leg muscles into walking after a hard run, the same must be done for a child who has been throwing up.

Most parents have heard of the BRAT diet (bananas, rice, applesauce and toast) but the Center for Disease Control, among other medical organizations, believe the diet is unnecessarily restrictive. Once the child can tolerate 12 ounces of fluid without vomiting, you can offer breads, pastas, crackers, soups and bland foods such as baked chicken or baked potatoes without much seasoning or fat.

Most stomach viruses will run their course without medications. But if your child is miserable, you can use liquid Maalox regular strength antacid suspension to ease tummy pain. Many parent ask about probiotics. some reviews have demonstrated a benefit in reducing stool output and the duration of diarrhea. However the jury is still out as to how helpful they are, which ones work best and how much exactly is needed.. There have been a few reported cases of harmful side effects. It may be safer to use a yogurt with a high concentration of healthy bacteria until additional studies help steer recommendation on how to best utilize probiotics. Never use anti-diarrheal medication. Antibiotics are never needed for viral infections. As with most aspects of parenting and childhood, this too shall pass! 🙂