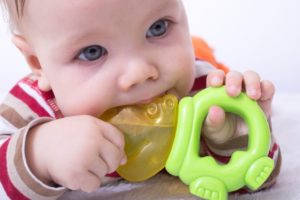 Most recently and most importantly, a meta-analysis of all available evidence looked at the following three case studies (among others) and concluded that some mild symptoms like drooling, gum irritation, and mild irritability are seen more commonly in children who are teething. They also noted a slight increase in body temperature, but nothing that would be considered a fever.
Essentially, if a baby has a fever, a temperature greater than 100.4F, rash, diarrhea, or if he seems particularly irritable, it is probably totally unrelated to teething, although it could be indirectly related because he is exposed to more germs by putting his hand or other objects into his mouth because his teeth hurt.

What about common treatments for teething used today? Do they work? Are they safe?

Research has pointed out that teething begins around six months of age. This is the same time when an infant’s immunities received from their mother, via the placenta, are demising. This means that the infant’s own immune system is becoming established. During this time, infants become vulnerable to minor infection. Because these two changes are taking place, the symptoms of teething can be confused with a minor illness or cold and vice versa. Probably the most important thing parents can realize about teething is that despite what your grandmother told you, teething doesn’t cause severe symptoms. But no matter what’s causing the fever, fussiness, or rash, the  symptoms are real. If you have any question about your child’s health be sure to ask your pediatrician – it is what they do!!!

We believe that children are more than just “little adults.” They have unique personalities, challenges, and life circumstances and we have made every effort to make our offices and care as “kid friendly” as possible. We have an aquatic theme in the waiting rooms (separated for sick and well children) as well as themed examination rooms. All of our physicians are Board Certified Pediatricians and members of the American Academy of Pediatrics and our nurse practitioners are all licensed Pediatric Nurse Practitioners and are available to see both well and sick children.
>> Learn More About Pediatrics of Florence