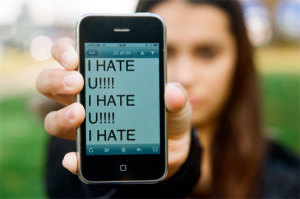 Internet bullying, also known a cyberbullying, can cause kids to have substance use and mental health problems. In a study by the Journal of the American Medical Association it is found that frequent communication with parents and family dinners can help to protect kids from the harmful consequences of cyber and face to face bullying. More conversations with parents in cars, at the home, and during dinner can make all the difference.

In some ways cyberbullying is worse than face to face bullying because it’s so hard for the parents to detect it’s going on. No reports from school. No black eyes. The new study involves anonymous survey data from more than 18,000 teens at 49 schools in Wisconsin.  The findings show that  one in five students said they’d been bullied on the Internet or by text messaging at least once over the past year. Cyberbullying is more common for girls than boys and it tends to happen as kids get in the teenage years. Kids how have be cyberbullied are more like to report mental health problems like anxiety, self-harm, thoughts of suicide, fighting, vandalism, and substance use problems.

Close to 20 percent of the children reported an episode of depression and 5 percent reported suicide attempts or using drugs.  Teens where are cyberbullied are more than 2 times as likely to have been drunk, been in a fight, vandalized property, or had suicidal thoughts.  They are 4 times as have misused drugs.

As the number of family dinners with parents increased, the better the mental health for kids who are cyberbullied an those who are not. It seems the support and the development of copy strategies is what can help kids who are victims of cyberbullying.

Advice to Give a Child Who Was Cyberbullied

Be sure to  emphasize that it isn’t the victim’s fault and that they shouldn’t retaliate.

It basically comes down to taking the time to check in with your child frequently in a relaxed social situation or a lot or potential problems can go undetected.