Facts About The Common Cold And What To Do About Them… 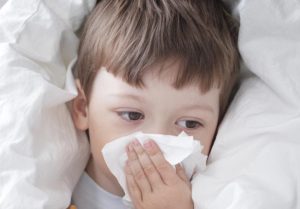 A runny nose, scratchy throat, and nonstop sneezing — you can’t miss the signs of a cold. But mystery shrouds a lot of other things about it. It has been around for centuries, and there is no cure. There is no vaccine for the common cold. This miserable feeling was called a cold because it usually would pop up in cold weather. Today’s scientist have identified 200 different types of cold viruses that are specific to humans. Most children will catch at least 6 to 12 colds a year. And usually in the wintertime.

Children are quit miserable when they have a cold. Their parents are desperate for relief and their pediatrician is frustrated at their inability to treat the cold. So, parents run to the to the pharmacy aisles to purchase cough and cold medication which have shown a lack of effectiveness in children’s colds. The Food and Drug administration did a study and found an estimate of approximately 10,000 products being marketed for cold, cough, or combined indications under the over the counter Drug Review. The FDA issued a public health advisory for parents stating the over the counter cough and cold products should not be used to treat infants and children less than 2 years old because of serious and potentially life threatening side effects. The American Academy of Pediatrics goes even further, recommending that children less than 6 ears old should not use cough and cold medication. Their finding is that serious health problems have been associated with the use of these medications in children, including death, convulsions, rapid heart rates and decreased levels of consciousness.

Unfortunately Cough and Cold Medication Do Not Work

A cold begins when a virus attaches to the lining of your nose or mouth. Either from contaminated fingers or from the droplets in the cough and sneezes of an infected person. The virus then attaches itself to the mucus membranes in the nose. Your nose and throat get inflamed and make a lot of mucus. With so much of your energy directed at fighting the cold virus, you’re left feeling tired and miserable. Very little can be done to help heal a common cold. In this case, Mother Nature, not a pediatrician, is the healer. It simply takes time and has to run its course. No amount of cough or cold medication will accelerate the healing process. Until healing occurs, there will be mucus and there will be coughing. This process takes at least two to four weeks.

Common Symptoms of the Cold

The symptoms of a cold can be annoying and lengthy. The good news is that it will resolve and improve without intervention. Rest, TLC and a little bit or Tylenol and Motrin to help keep the baby comfortable.

Answers to a Few Question About the Common Cold

How do I avoid getting a cold?
It is virtually impossible to avoid catching a cold from time to time. There are several steps you can take to help prevent and reduce the spread of viruses that cause it. Washing of hands and disinfecting common surfaces can reduce the frequency. Vitamin C and Echinacea used as a dietary supplement have not been shown to be effective in preventing colds.

When do I need to see a doctor?
While a cold cannot be treated and will get better with time, secondary infections need to be evaluated and appropriately treated. So if you suspect a middle ear infection, sinus infection, or pneumonia call your pediatrician. A secondary infection can sometimes cause a sudden spike in fever, an increase in fussiness, labored breathing, and loss of activity. If that happens call the pediatrician.