Be Careful Not to Start Your Baby on Solid Food Too Soon! 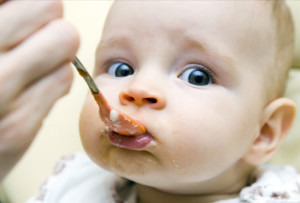 40% of mothers start their infants on solid food earlier than medical experts recommend.  This especially happens to babies who are formula-fed.  Experts recommend a minimum age of 4 months old says a new study in the April 2013 issue of Pediatrics.

53% of infants who were formula-fed and 24% of breast-fed were started on solids before the recommended 4 months.

Mothers who started their baby’s too early on solids cited reasons such as ” My baby was old enough,” and, “It would help my baby sleep longer at night.”

There are multiple reasons why you should wait 4 months to give your infant solids.  The American Academy of Pediatrics states that the head and neck control and overall coordination that an infant needs to safely eat solids does not develop until around 4 months. Also the study notes that feeding infants solids early could increase the risk of chronic diseases, such as diabetes, obesity, eczema and celiac disease.